Some Kids Must Die


So when will the Occupy Wall Street protests reach critical mass? When will they produce real change? I'm afraid some kids must die first. There are now Occupy Wall Street protests in just about every major city in the U.S., and in other cities around the globe as well. How much attention are they getting? From the politicians? From the media? (I was going to say, from the mainstream media, but I'm not sure we have mainstream media any more. We get our information mostly from the right — most large media corporations seem tilted to the right — or online. And everything seems slanted one way or another. Or is that just me?)

I can't help but think back to the Vietnam War protests — the last time the public outcry was loud enough, and sustained enough, to produce real change. There were large protests — be ins — sit ins — on just about every major campus and in every major city. Mostly ignored by the then mainstream media. It took the deaths of four students at Kent State by the Ohio National Guard (May 4, 1970) for the peace movement to really get ramped up. It took the deaths of four young people for the politicians, and the majority of middle class Americans, to really sit up and take notice. And realize that something had to be done. 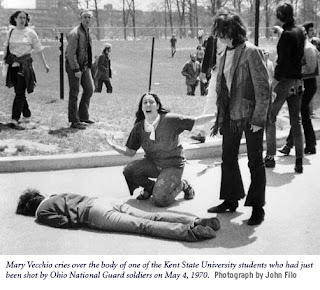 A week later, 100,000 protesters converged on Washington, D.C., to protest the shootings of the students in Ohio, and Nixon's escalation of the war. And more than 450 university, college, and high school campuses across the country were shut down by over 4 million students, the only nationwide student strike in U.S. history. Still, it wasn't until 1973 that the Paris Peace Accords were signed (1/27/1973). And in spite of that, it wasn't until August, 1973, that American involvement finally ended (Case-Church Amendment) in Vietnam. It took significant and sustained protest, over many years, to finally end the war.

Do the Occupy Wall Street protests have that kind of sustaining power? What will it take to galvanize the rest of America into action? To fix our dysfunctional system which rewards the already rich at the expense of the rest of us (the 99%)? I'm afraid some kids must die. We have to see our police shooting our sons and daughters for all of America to get angry enough to really demand change. 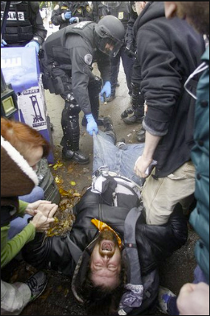 Justin Bridges, after being beaten by the Oakland Police. iChat Image(400792128) from elareafae's photostream
And it may happen. Our police, when they put on their storm trooper outfits, seem to adopt that mentality. There have already been serious injuries. Scott Olsen, who served two tours of duty in Iraq as a Marine, was critically injured by a tear gas canister in Oakland, and suffered a fractured skull. Justin Bridges, an American Sign Language translator for Occupy Portland, was beaten by the Police and may have lost some of the use of his right arm.

So what will be the outcome of the Occupy Wall Street protests? Will the bankers be called to account? Will there be more regulations on banks and brokerages? Will there be more jobs? Will the ultra rich end up paying a fair portion of taxes? But maybe the bigger question is:  Will there be more equity? How do we move back toward a more egalitarian society? Where there's less of a gap between rich and poor? Between the haves and the have-nots? Between the privileged and the rest of us? Can this happen? Or are the forces of big corporations, bigmedia, and big bucks too powerful to allow any substantial change. Will there be minor concessions, then back to business as usual? Or will the demonstrations grow, and involve a larger cross-section of the American public demanding change?
Posted by K1 at 10:37 PM